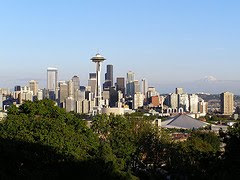 News from across the ‘pond’ as reported in The Seattle Times, where an article about the lack of demand for wind turbines means many manufacturers are claiming business is “sluggish”.

The job boom, despite millions in tax credits, is just not happening.

Whilst some manufacturers are sitting on tax credits awaiting for demand to pick up before investing in new equipment, others are running at low capacity because of the lack of demand.

One manufacturer recently stopped production at its factory – the 500 workers on extended paid leave until production resumes later this year.

It’s not all doom and gloom though as several companies that supply parts to the wind turbine manufacturing industry have seen their businesses grow.

“Installed generating capacity from wind in the U.S. now totals more than 35,000 megawatts — compared with about 330,000 megawatts from coal. The wind trade group estimates that U.S. wind power will eliminate 62 million tons of heat-trapping carbon dioxide annually, the equivalent of taking 10.5 million cars off the road.”

To read the full report in The Seattle Times – click here.