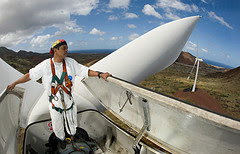 I can’t be the only one?

I’ve noticed, of late, that there seems to be a lot of stories and articles regarding wind turbines, that have really called into question the usefulness of wind power as a viable renewable alternative to our energy problems.

On the face of it, what could be simpler?

The wind blows, turns the blades which drive a mechanism which converts revolutions to electricity which is then sent off to the Grid.

The reality seems to be far from simple.

For starters, there’s been lots of headlines about the small amounts of useful energy actually produced by wind farms with some suggesting that energy production has fallen.

This has been blamed on too much (or too little) wind, too much and the turbines overload the system and have to be switched off. Too little and well, that’s pretty obvious.

Then there’s the costs involved of siting large scale installations off-shore, and the dangers of working in such environments.

And some are even claiming detrimental health caused by living too near to existing wind farms.

So are the days of wind turbines numbered? With so much adversity (both human and logistical), it would be easy to assume that.

What do you think?