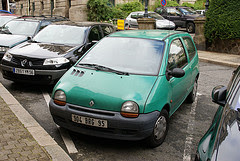 Top Gear – that funny, irreverent motoring show with those cheeky chaps Messrs Clarkson, Hammond and May was on the TV yesterday evening. No not a repeat, this was actually a new show.

I tuned in (by chance) and caught them reviewing a new Nissan model, whose main selling point was its price – £6995.

During the funny (ha ha) test drive, during which Jeremy pointed out a lack of electric windows and mirrors, it’s small engine etc, it occurred to the ‘team’ to see what else they (and therefore you and I) could buy for £6995.

Now I know that Top Gear is entertainment first and actual everyday motoring a poor fourth but “Captain Killjoy” (May) did have a point in the post drive studio slot.

Whereas the presenters had chosen ’10 year old’ supercars they’d found on the internet for £6995 and below, the point is that everyday motorists – you an I – are likely to choose the Nissan because it’s frugal, cheap to run and if anything like my previous Nissan’s, very very reliable.

In fact, we saw more interior and exterior shots of the ‘super’ buys than we did the Nissan.

Yes you could buy a 10 year old Merc’ or Subaru, but you and I know that a breakdown could be imminent, not to mention a garage repair bill for more than the car’s worth.

Even if we could afford the petrol, insurance and road tax on such beasts would probably see us living in a cardboard box.

Quite a few years ago, I was on a driving/camping holiday in Northern France. At the time, Renault made a model called the Twingo – small hatchback, no frills, cheap as chips.

It wasn’t available in the UK – because it was so cheap, they didn’t make a RH drive model (then).

Well, these Twingo’s were everywhere (those and lots of the 7 seater Espaces).

Sounds like a cheap, no frills car that’s cheap to run and pretty green too could be a popular choice – even today.