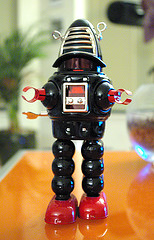 Could a new breed of cutting-edge designed Solar Panels be on their way?

MTR4U reported that lab tests are under way using ground breaking nano technology in the design of a completely new form of solar panel which captures Infra Red radiation.

Tests have shown these panels are 3 times as efficient as the traditional silicon based solar panel technology and can even generate power at night, thanks to capturing the energy from the infrared band.

And MTR4U’s report (read it here) suggests that two teams in particular are well on the way to overcoming the technical hurdles of collecting and converting this form of solar energy.