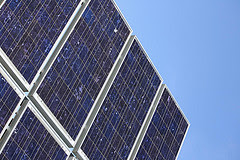 A 10,000 solar panel park in Pembrokeshire has opened in the nick of time – 3 weeks before the Governments feed-in tariff reductions kick in for large scale renewables installations.

The solar panels are of a special design, featuring a cutting edge thin film, from the States. They’re expected to generate one megawatt – enough to power around 300 homes.

Although various developers are getting around the development ‘size’ issue by planning smaller multiple installations, they’ll still not get the generous tariff of home / domestic installations. Other developers however, are pressing on with plans for 3 and 5 megawatt installations. (source BBC).

The limit before reductions start to take effect is 50 kilowatts. With the average home installation around 4kw, homeowners are safe for now.