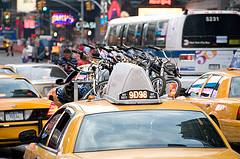 With reports suggesting that America’s financial crisis is being solved, the road out of post-recession is causing problems of its own – on the roads themselves.

With more and more motorists returning to using their cars, traffic queues and jams are becoming the norm once again, and that’s causing a whole lot of wastage according to a 2010 Urban Mobility Report.

It reports that Americans had to travel 4.8 billion hours more due to congestion and had to fill an extra 3.9 gallons of fuel at the rate of $115 billion.

That translates roughly to an average motorist spending a whopping extra 34 hours and $808 in traffic in 2009.

Of course some areas are worse than others – the worst affected were motorists in Washington DC and Chicago who spent an average of 70 hours in peak traffic losing $1738 and wasting 57 gallons of fuel.

The study claims that with more and more drivers taking to the roads, the emphasis has got to be on providing a better infrastructure including more public transport, tolls and mass commuting facilities.

One glimmer of hope was the finding that public transport networks like train and bus saved 785 million hours of wasted time spent in traffic. Clearly where the smart money was then.

If you’re interested, you can read how one commuter in Derbyshire, UK has found delight in various public transport ticket deals for his daily 40 mile commute – read more here