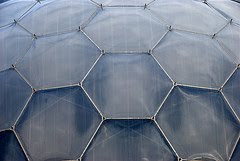 “Geothermal Engineering Ltd – a privately-owned British company specialising in the proving and development of geothermal resources – outlined plans for the project near Redruth in Cornwall last week (October 12) and, subject to planning permission, the start date for drilling will be mid 2010, with the plant set to be commercially operational by 2013.

These plans came after the Eden Project spoke in June at the House of Lords of hopes to build a geothermal plant that would generate 3MW of power and “several” megawatts of heat energy”.

The plans would involve drilling a 5km deep well where temperatures are expected to reach 170 degrees C. Water is pumped via a series of pipes down the well and across the hot rocks which heat the water, the resulting hot water or steam is then pumped back to the surface via the same well, where it is used to power turbines that can generate electricity as well as being a source of renewable heat.

Previous research has shown Cornwall has a suitable heat resource, which is trapped in the underground granite rock.

The plans make interesting reading and the expected electricity generation capability for the South-West of England is impressive. Please click here to read the full article, which includes a useful diagram of how the geothermal plant will work – good resource for those school homework projects!