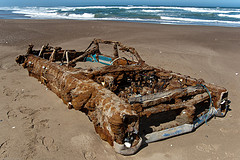 As one US newspaper – the Argus Leader – was reporting that an Indian based wind turbine manufacturer was effectively moth-balling its plant in Minnesota with the loss of 110 jobs, another was reporting the US wind sectors slowest growth since 2007.

The Minnesota facility will keep about 30 staff on after the lay-off at the end of December, to keep the factor in a state of readiness for re-opening at a later date.

The closure is due to a lack of orders, with the situation being blamed on the lack of long-term US energy policies like the renewable electricity standard, which has caused severe doubts in the industry and stalled projects as companies and investors hold back.

It’s a similar story in Brandon where another manufacturer has stalled beginning production in a new 115,000 sq foot plant because of a lack of orders and the effects of the economic downturn.

Wind Power Monthly reported that US wind projects have been installed at half the European rate and a third the rate of China in 2010.

Again, the lack of the renewable energy standard – which would specify the proportion of electricity that must be derived from renewable sources – is being cited as a major factor.

Oregon added the most wind capacity of any state in the last quarter of 2010, surpassing the historical leader, Texas.

As if these figures weren’t cause for real concern, WPM goes on to report that Iowa (second only to Texas in installed capacity) only installed a single megawatt in 2010.

National year to date installations were down by a jaw dropping 72% on 2009.

One thought on “U.S Wind turbines grind to a halt…”