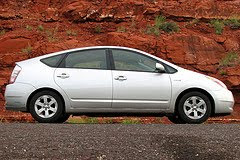 Spotted over at Renewable Energy Focus –

“The Zayed Future Energy Prize jury cited Toyota Motor Corporation’s revolutionary technologies, which have set the global standard for fuel efficiency and innovation, as the key factor behind selecting Toyota as the 2010 winner. The original Prius was launched in 1997 and the judges estimated that in the last 13 years has saved around seven million tonnes of carbon dioxide from polluting the atmosphere, due to fuel efficient technology.”

Since last year when I enjoyed a very impressive drive in a UK Toyota Prius, I’ve added it to my list of possible next cars. In fact, the drive prompted me to ask, on this very blog, “Will your next car be a hybrid design?“

“For drivers in and around London (and other cities that may follow London’s example), the other major running cost to consider is the Congestion Charge. As most hybrids are in PowerShift Band 4, they receive a 100% discount on the London Congestion Charge (although owners of hybrids need to register with Transport for London and pay an annual £10 fee). With a £8 payable daily charge, this could provide a potential annual saving of up to £2000. The PowerShift Register lists vehicles that qualify for London Congestion Charge discounts.” Read the full post by clicking here.

It’s certainly food, or should that be ‘fuel’ for thought.