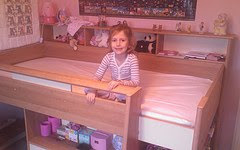 Having now moved house twice (and switched around kids bedrooms a few times), I’ve done my fair share of flat pack cabin bed dismantling and re-assembly and having learnt from my mistakes, hope the following guide may give you some pointers when faced with taking apart your own children’s cabin bed.

The first thing to do is clear some floor space and pull the entire bed away from any walls – you’re going to need the access to both head/foot ends and the rear as well. A good screwdrivers gap away from the wall should suffice.

Next, remove the mattress and any drawers / cupboard doors from the main bed frame.

Cabin bed designs may vary so you’ll have to pay particular attention to how yours is constructed but generally, I start by unscrewing and removing the front ‘bed edge’ – the cut out ‘plank’ if you like, over which the child gets into the bed. It usually slides in between the two main side pieces (which also usually form the ‘legs’ of the bed).

Next, if it’s another ‘plank’ across the back of the bed, remove that in a similar way.

Now you’ll need to remove the boards that form the base for the mattress – this is usually two or three ‘planks’ of unfinished chip-board and there are usually numerous screws as they pass through the mattress supports into the various cupboard and drawer frames / vertical pieces underneath. Screws usually also enter from the foot/head ends as well. Aren’t you glad you moved the cabin bed away from the wall before you started unscrewing it now?

Lift this out of the way and you should find that you’ve now got a bed frame that can be ‘split’ into two halves (foot and head halves).

Now it may be that this is enough to move the cabin bed around – maybe even get it through a doorway.

If it isn’t, then you should be able to remove the two big side panels (which form the ends and ‘legs’ of the bed) by removing all the screws which only go through and support the internal shelves and supports.

With these two large panels removed, you’ll be left with smaller ‘built’ pieces which should be light enough to carry and fit through a doorway.

It’s not usually necessary to completely dismantle the entire bed (unless you’re moving the cabin bed by car, in which case you may need to return it to it’s flat-pack status.

Re-assembly of the cabin bed is the reverse of how you took it apart.

TIP: As most mobile phones have cameras etc, take plenty of pictures of the assembly before and during the taking apart – they’re immensely helpful when you come to put the bed back together – especially if there’s a duration of some time.

My other life-saver is the ever present margarine tub (with a tight fitting lid) to put all the fittings and screws in as you take the bed apart.

Problems you may encounter:
Wooden dowels.
You may find the wooden dowels used in the assembly have been glued, usually with a wood glue. I’ve tried gently tapping apart with a large flat bladed screwdriver in the joint I’m trying to separate (take care if it’s a panel face that can be seen when constructions complete) and a small hammer. Failing that, a gentle ‘rocking’ of the joint and if all else fails, then you may have to consider sawing through the dowel. Be warned though that doing this will leave the structure a little weaker when you put it back together.

If dowels snap when pulling apart, then a spot of wood glue when putting the cabin bed back together usually makes things a little stronger.

Screws won’t tighten up.
A combination of over-tightening or repeated dismantling and assembly can leave screw holes well used. I’ve used a matchstick (with the live end snapped off or a spent match with the charred bit removed) inserted in the hole and this usually ‘packs out’ the hole enough to achieve a tight fit. Use two matchsticks if needed – one either side of the hole.

Plastic screw head covers missing.
Yes, they’re notorious for falling off and going up the hoover. Depending on the positioning of the bed, it may be possible to rob a few screw head covers from the end/s facing the wall for those bed edges that face into the room.
If the cabin beds for a younger child, I generally don’t fit them as they could be a choking hazard!

Holes don’t line up when you come to re-assemble the Cabin Bed.
This is usually a case of the bed being out of square – a gentle nudge with your foot or leg against one of the edges should bring it inline. Generally, I don’t tighten screws completely until the constructions complete as leaving them a few turns off of tight gives you a degree of flexibility to line things up. Be wary when taking apart that you don’t ‘over-stress’ joints by moving the bed out of square.

Don’t forget – if you don’t need the bed anymore, then consider donating it to a furniture ‘charity’ who’ll usually collect large items and pass them onto other families in need. If the beds beyond use, then most local refuse sites have a recycling point for chipboard and other woods etc.