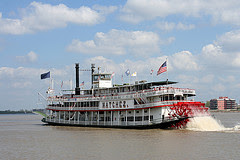 Low prices for electricity is just one of the problems facing renewable power developers in the USA.

The ‘problem’ could be stalling plans for alternative energy projects like developing hydrokinetics – energy from water sources like the Mississippi where instead of using dams, energy would be harnessed from sunken and surface based turbines, making use of the flow of river water.

Experts reckon new advances in generators, capable of running on variable speeds (due to the flow of water), could hold the key (source AP)

Although the ‘wave’ technology is still in its infancy, hence little data on exactly how much energy such installations could produce reliably, installation projects are underway.