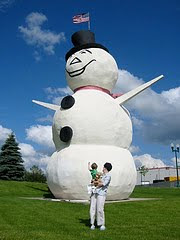 When I was a lad and we went on our annual family holiday to Wells-next-the-sea on the Norfolk coast, Swaffham was a town to be avoided due to traffic jams.

Unless there’s a new by-pass, that situation is unlikely to have changed with the introduction of the UK’s largest solar panel at the Ecotech Centre earlier this week.

As the Eastern Daily Press reports, the centre hopes that in addition to the considerable cost savings to their own energy usage whilst also selling surplus back to the National Grid, the new solar panel will also play an important educational role for the centre’s visitors.

The solar panel, which tracks the movement of the sun, making in 30% more efficient than a static panel, was part funded by the centre, Ecotricity, the Low Carbon Buildings Programme (now shut down) and the National Lottery. It cost £50,000 and the cenre hope to recoup their investment within 8 years.