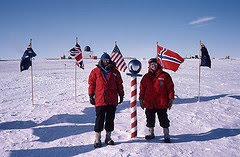 Whilst all those new MP’s (about a third of them will be new) are busy sorting their desks and having their offices re-decorated (such is my mental image of what happens when you’re first appointed), the hot topic for discussion (after perusing the delicacies on offer from the tea trolley) will no doubt be taken up with the black hole in public finances.

(I wonder if Mr Cameron and Mr Clegg take turns to sit in the PM’s seat when nobody’s looking?).

Anyway I digress – As I was saying whilst the hot topic of conversation may well be the countries finances, many green groups will be hoping for a more considered approach to the environment, hoping to have picked up a few extra ‘voices of support’ with the re-shuffling following last weeks general election.

One headline the green groups will no doubt be waving high is the news from the South Pole that they’ve recorded their warmest year on record (records only began in 1957). For those interested in the facts – that was 54.2 dgrees fahrenheit or minus 47.9 degrees celsius (source Live Science).

Aside from any impending ecological disasters to occur as a result of the temperatures, one group noticed the effects of the warming immediately – the 300 club whose curious members must sit in a 200F sauna before running outside in a minimum -100F temperature wearing only their boots, was probably short on new members.

Read the full story on the South Poles warmest year by clicking here.