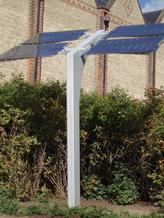 Quick thinking staff at a recycling centre at Bidston were praised after spotting a ‘mortar device’ last week.

The whole centre was sealed off and refuse deliveries re-routed whilst the Bomb Disposal team tackled the device which was a “powerful mortar-fired illumination” as used on the battlefield to turn night into day.

The Wirral Globe reports an investigation is now under way to try and trace where the mortar shell originated from.

And in other news….

Treehugger reports that the 4 trees are about the same height as a street lamp and will provide 10% of the facilities energy requirements.

Treehugger doesn’t like them very much and you have to wonder why a nearby roof wasn’t used instead? See the pictures here.