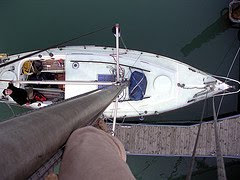 Thanks to Sail World for their story following a large solar powered yacht as it attempts to circumnavigate the world.

Starting off from Monaco, heading east to west, Planet Solar was planning to take 160 days to complete the journey, however, after 146 days, they’re only just Galapagos heading across the Pacific.

The craft is attracting huge interest where-ever it docks with the crew spreading the word of a better, brighter less polluted future.

Good luck guys with the rest of the voyage and re that whole time thing – as my old school used to say – nobody ever grew taller by being measured.