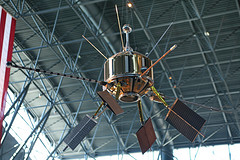 After the excitement and anti-climax of the recent satellite falling to Earth – it apparently fell into the sea off the coast of America eventually, comes news of a larger satellite also due to ‘return’ to Earth next month.

The 900 pounds ROSAT – a German telescope – could fall over land. Of particular concern are the large mirrors which collected solar energy, to power the satellite.

Don’t put your hard hats away just yet.