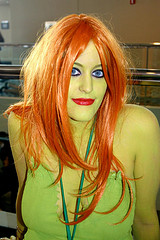 “green but not with envy”

A rare occurrence – reading a weekend paper – but one I actually managed this weekend and I’m jolly glad I did to.

The Independent ran an interesting article on Smart Meters.

It seems that a trial of 18,000 homes by Ofgem has revealed that those families only managed a reduction of 3% compared to not having the smart meter.

The figures, The Independent reports, are still higher than the 2.8% (in electricity) and 2% (in gas) reductions the Government expects when smart meters are rolled out nationwide – due to start in 2014.

And there were other side-effects too. Family quarrels and bickering as only certain family members engaged with the technology whist others felt condemned for using energy is so frivolous a manner as boiling a kettle.

One homeowner reckoned his wife was so obsessed that she wouldn’t put the heating on, resulting in them sitting in the cold, rather than being warm.

The smart meter programme isn’t going to come cheap and the costs must surely be passed onto homeowners in some guise, under ever increasing and unmanageable energy bills.

And with a return so low (and this from ‘volunteers’ already interested in the technology and using it), you have to wonder if there will be any energy reduction / cost benefits at the end of it all?

One thought on “Smart meter energy savings less than 3%”