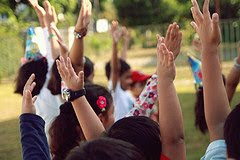 Scotland is big, really big on renewables and the Scottish Government have obviously set their sites high on achieving high levels of renewable energy by 2020.

So much so that their ‘culture’ of investing and promoting renewables usage and development has extended to their primary schools.

All Media Scotland reported that 100 school teachers from across the Highlands and Islands will be participating in specially devised workshops during March.

The Scottish Government predicts the creation of at least 28,000 jobs will be created by the renewables boom in offshore wind alone. The workshops translate into special educational packs for primary schools containing hands on models to build, posters and fact sheets.

Teachers that have already taken part in the workshops and used the subsequent ‘packs’ with their classes are delighted with the response from the children and the ease with which they were able to integrate the material into their normal studies.

It’s hoped the early exposure to the renewables resources will encourage children to take up a role in the renewables industry when they’re considering career options later.

The resource kits cost £200 and over the past three years, 330 teachers have taken part in the workshops.