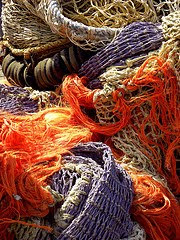 Following neatly on from yesterdays post about a recycling plant in Tyneside using heat from the furnaces to produce energy, I received a ‘tweet’ from Green For You – advising of this column in the Telegraph.co.uk

I think you’ll get the gist of the article from this except:

“The Great Pacific Garbage patch was originally discovered in 1997 by Captain Charles Moore.
Roughtly the size of Texas, the patch is characterised by exceptionally high concentrations of suspended plastic, chemical sludge, and other debris that have been trapped by the currents of the North Pacific Gyre.”

Apparently, the particles are so small and under the surface that they can’t be photographed from the air.

Think I’ll stick with swimming the English Channel for now.