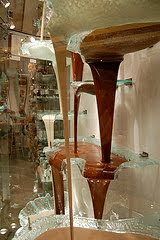 Hydro electricity isn’t all about huge dams and massive installations as one welsh family are proving.

North Wales has shown some of the biggest interest in hydro-power installations recently with many farms installing their own hydro plants to power farm buildings and equipment.

The Bennett family have already installed solar panels on their roof, taking care of their homes electricity needs. Now they hope to power their homes heating and hot water via the hydro installation.

The Installers calculate their installation will generate around four and a half KW’s, generating 21,000 units of electricity a year and giving the family an income of around £4000 a year through the feed in tariff payments.

“It will completely replace their current gas heating system”.

The costs of installing a modest hydro generating unit can still be high with costs reaching up to £50,000, however, the long term benefits are huge.

The Daily Post also reports there are currently over 60 hydropower schemes being considered for approval across Wales.

*Boy that was a tough one – coming up with a chocolate themed illustration (this week’s illustrations have paid tribute to chocolate) that still tied in with Hydro Electricity. Thanks to MC Quinn for his picture of a chocolate fountain.

One thought on “North Wales family get hydro electricity go-ahead”