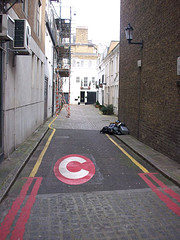 “is it me or does the Congestion Charge symbol
look like the Mysterons on Captain Scarlett?”

That drop means just 55 ‘green cars’ were registered during 2009.

For anyone thinking that ‘green cars’ were going to revolutionise road transport in the UK and provide an answer to the gas guzzling petrol heads, it’s a bitter blow.

And as if that wasn’t bad enough, buried away at the bottom of the piece was a line about the Mayor of London’s confirmation of new congestion charge rules, that means vehicles like the 1st generation Toyota Prius will not be eligible for escaping the congestion charge.

That could affect 60,000 owners of hybrid cars. That’s the real story here – not a bunch of manufacturers charging £28k for their latest electric car offering.

Now who’s putting the boot in?