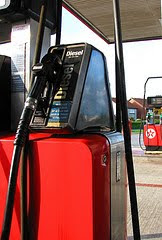 Yesterday, we reported on how DJ Mark Goodier had not only taken delivery of an all electric Nissan Leaf motor car, but that he was also using a solar panel installation to charge it, saving even more money.

British Gas’s tariff which uses a cheaper off-peak tariff reckons owners will pay just £6 to charge their car, compared with a typical petrol cost of over £65 for a 50litre tank.

Based on an average 10,000 miles a year, they reckon the average owner could cut £1,200 from their annual fuel costs.

The tariffs aren’t expected to be available until 2012 but British Gas is apparently trialling the scheme this Summer. Anyone interested in taking part should email evenquiries@britishgas.co.uk.

It’s long been the argument of environmentalists and those in the green energy generation industry that electric vehicles were only truly as green as the energy that powered them and in the longer term, it may pay dividends to get in early, make full use of the feed-in tariffs and generate your own charge via a solar panel array.