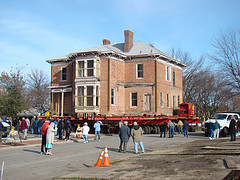 To save precious pennies, we decided against removal men and instead opted for a self drive van hire.

True, we’ve still got a few car loads to go yet whilst the kids sort out what they’re taking and what’s going to the charity shop, but on the whole it went pretty smoothly.

However, we did encounter a few problems.

Stairs – our new place is on 3 levels so there were two sets of stairs to negotiate wardrobes around. The tight corners of an old house didn’t help either but one positive effect of moving to an older property was the height of the ceilings which definitely helped.

Aside from a fridge, washing machine and a running machine, myself and the eldest’s boyfriend managed everything else. A neighbour chipped in with the aforementioned heavy items and between the 3 of us, we managed to manhandle things without loosing too much skin.

Much of the shelving and beds had already been taken apart prior to moving, which meant everything was easily handled ( the middle daughters book collection was another test of one’s back entirely). We discovered that new houses with their lower ceilings meant pretty much everything upstairs would have had to come to pieces anyway.

There was one panic inducing moment when we got a shelf unit stuck halfway down the stairs, wedged tight against a step and the slope of the ceiling. I had visions of trying to take it apart on the steps! Luckily, only a few marks on the ceiling are left as testament to the effort it took to get it back to the landing.

Our move took 3 days (starting early and finishing late). I covered 550 miles in return trips with the van between our old house and our new one.
Hire costs were £100 ( the bank holiday meant we only paid a nominal insurance fee for the monday due to the fact that the hire office was shut!).
Diesel for the van was another £90 which given the mileage wasn’t at all bad – the van was a high roof Mercedes Sprinter (with a side door which was a godsend when unloading pavement side at the new house) and a drive I can thoroughly recommend.

What were the downsides? For me, just the three items we couldn’t handle between the two of us. Ok so we learnt a lot about angles and where not to lift certain furniture from, and it was bloomin’ hard work – we didn’t stop, except to eat and sleep.

On the plus side, moving ourselves meant:
– we were able to move at our pace so there was no frantic packing
– we haven’t packed anything we’re not going to be wanting at the new house
– at the new house, we weren’t forced to unload everything in one go making it impossible to move around
– we saved around £500 on removal costs – after taking the cost of van hire and diesel into consideration.

Of course, using a professional removals company means your possessions are insured during transit – something moving yourself foregoes (but it may be worth checking with your contents insurer anyway) so we took extra care (the flat screen tv was wrapped in a quilt for extra padding and tied to the bulkhead of the van) and hoped we weren’t in any accidents. And or course, we had help. If you’re on your own or unable to lift heavy items then don’t even think about moving yourself.

If you’re moving long distances then again, a single lorry load will probably make more sense (as well as letting someone else do the driving and all the unloading at the other end).

So we’re all moved in thank you very much. Just the utilities and internet connections to sort out and a few car loads still at the old house.

Sure it was the most tiring weekend we’ve spent in ages – both having ‘desk jobs’, we’re not used to the manual labour and Arnold Schwarzenegger i’m not but we coped, without pulling any muscles or putting any backs out. It’s all down to technique (and a handy takeaway round the corner from your new home).