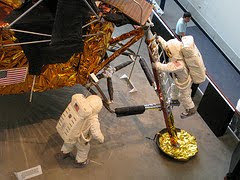 No – not a Dr Who story line or the next ‘rogue robot’ blockbuster from Hollywood.

The Daily Mail reports that Japanese scientists have devised plans to build huge solar panel arrays on the surface of the Moon and beam the energy generated back to Earth.

For the Japanese, following the catastrophic damage to their nuclear power programme caused by the recent Tsunami, a switch to renewable energy is becoming a real priority.

The plans involve sending astronauts back to the Moon, with a fleet of maintenance robots to keep on top of repair and help in levelling the crate marked surface.

Not your average solar installation, the Japanese plans involve a 6,800 mile long band of panels that would stretch around the light-side of the Moon’s equator. Read the Mail’s full article here.