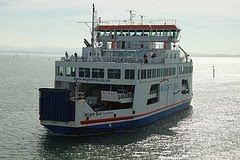 The BBC ran a report a few days ago reckoning that the Isle of Wight is aiming to be completely energy self-sufficient by 2020.

The Island currently draws 600GWh of electricity a year from the mainland, but a community group, launched 4 years ago by the Islands’s council, reckons not only could the Island generate that much themselves, they could also be passing energy back into the mainland.

The Islanders hope to draw on solar, wind and tidal renewable power sources in their bid.

The island already has several green projects on the go including a bio-diesel that’s produced on the island, and electric bikes and cars.

I’ve enjoyed many a holiday on the Isle of Wight and it would be brilliant to see them become energy self-sufficient. Perhaps that’s the way forward for us all? Smaller communities working to make their local environment self-sufficient rather than on a UK wide scale where the numbers and infrastructure required becomes too problematic to overcome.