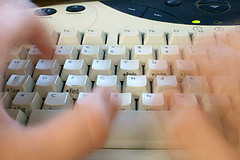 Have you noticed your home Internet connection running a little slower than usual since the cold weather began?

The ‘cold’ is affecting the system though not in the way you might imagine – wrapping the exchanges up in woolly scarves and hats isn’t going to help. The problem is the increased usage.

One Internet provider reported a usage increase of 40% when the cold spell first struck as thousands of workers were forced to work from home, unable to make it into the office. When you add to that the seasonal increases as people shopped online for Christmas presents, it’s not hard to understand why speeds were so slow.

Meanwhile, some online retailers have warned shoppers that Christmas orders may not be delivered as they struggle to get good delivered and deliveries made. The Royal Mail has already suspended its guaranteed next day delivery service (correct at time of writing).

A survey revealed that over half of British consumers planned to make an online purchase last week with over £600 million in online transactions recorded on one day alone.

This story is taken from our weekly homeowner newsletter published on the 20th December 2010.