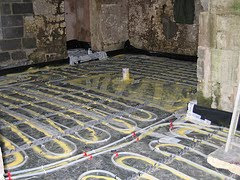 Anyone following the renewables industry and Government news will have gleaned that it’s going to be tough for the UK to meet it’s emission cutting targets.

With so much potential wind energy being tied up in (or refused) planning, solar energy is the only technology making any real headway in the domestic markets.

However, there is another alternative that could very soon be in the mainstream – particularly when the Green Deal tariff’s start next year (2012).

That technology is ground source and air heat pumps.

Basically, heat from the ground or air, is exchanged and ‘pumped’ into the building, providing heat.

Air source heat pumps are best suited to properties without the land required for a ground source heat system – ground source pumps rely on coils of fluid filled tubing being buried under the properties garden – either vertically or as more people will be familiar with, coils overlaid in shallow trenches.

And the Air source industry reckon modern technology makes their systems quicker to ‘payback’ the installation costs, which may also be cheaper to install.

You may be forgiven for thinking these heat exchange pump systems are a new technology but you’d be wrong. Although we’re only really just starting to see such systems incorporated into new builds (usually individual designed and built dwellings), and smaller commercial units, the technology itself has been around commercially for the last 20 years and been successfully used in scandinavian countries.