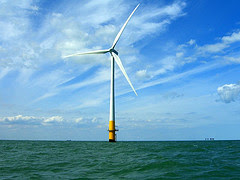 Last week, The Times carried a story regarding new offshore wind farms planned around the UK which would generate enough electricity to power half of the homes in the UK.

Sited far out at sea – the largest ‘field’ Dogger Bank being some 130 miles off the North East coast will cost an estimated £75 billion to complete.

What caught my eye particularly was the fact that contracts for the actual construction of the turbines themselves is likely to go to overseas companies after the UK’s last wind turbine producer closed in 2009 due to the “British market being to slow to develop”.

The other very interesting fact was a quote from the British Wind Energy Association which stated that the cost of building wind turbines had almost doubled in recent years due to the value of sterling and a reliance on imports. They estimate that “each megawatt wind capacity announced today will cost up to £3.1 million, compared with £1.5 million for the first offshore wind farms approved a decade ago”.

You can read the full and very interesting article at The Times (online) by clicking here. There’s some truly mind-blowing figures quoted – like the fact that the turbines will create the equivalent electricity of 21 Sizewell B nuclear power stations.