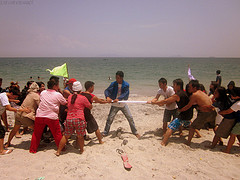 First spotted in The Guardian, was this story that the Government’s Renewable Heat Incentives (RHI) have been “pulled at the last minute”.

The blame is being laid at the feet of Europe – the report goes on to say – as the European Commission, unhappy with the large tariff for Bio-mass generated heat, is believed to have said they’re happy for the RHI to go ahead, subject to the Bio-mass tariff being reduced.

The Guardian is quite right – not only is it a severe financial setback for all those that have already invested in renewable heating sources, but the setback to the launch of the RHI could knock confidence in the UK’s green industry as a whole.

The Government hope to have the RHI scheme back on track, but admit a delay of around 2 months may now ensue, whilst proposals are re-written and voted on.

At least those that have already installed renewable heat sources will be saving on their energy bills – small comfort to those that have invested heavily and were hoping to see a decent return on that investment, via the RHI tariff payments.

For larger installations, there’s going to be a lot of worried investors and I suspect a lot of installation projects that were due to start may be put back, whilst the tariff situation, and indeed, the amounts the tariffs will actually pay out, are decided.