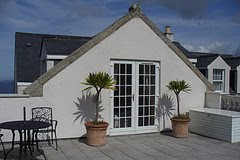 French doors must be very popular judging by the recent amount of searches by homeowners for French Doors and French Windows Quotes, particularly UPVC French doors, but why is that?

French doors differ from Patio doors in that french doors are hinged at the sides, whereas patio doors slide open.

It’s possible to mimic the French door look of small individual panes of glass in a patio door just by choosing a design which incorporates those ‘mock’ bars within the glazing panel itself.

And don’t forget, you don’t have to have the ‘small panes’ look in your French doors. A single large pane of glass is equally stunning and attractive.

One reason French doors are so popular is they’re particularly good at turning an ordinary window into a doorway into your garden or patio.

Using a French door to replace a standard window also means you benefit from a lot more natural light entering the room, the French door is located in.

If you’re replacing a particularly large wide window, then you can still have French doors, but also incorporate a solid side panel or glass pane either side of the actual doors.

You’re preferred French door installer / company should have all the tools and experience to carry out a simple window to French door conversion. All you’ll be left with is a little decorating around the interior door frame to touch up.

And if you’re worried about security, then todays modern French and Patio door designs incorporate some serious locks and security features.

And now for a totally obscure French door fact – Did you know that in France, what we call a French door, the French call a Spanish door.

Wonder what the Spanish call a ‘French door”?