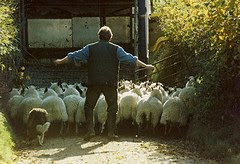 Spotted in the Farmers Guardian – how one welsh farmer prays for rain.

Whilst many of us struggle with torrential downpours or even the odd drizzle, one Welsh farmer loves the stuff.

And he’s got good reason to.

Alan Williams has installed a 10kW hydro electric generation plant on his 300 acre farm and in the 18 months since he installed it, has been saving himself a pretty penny.

“Not only are there the normal savings in expenditure to be had, but it also maximises payments for the surplus energy being fed into the National Grid.

At the heart of the venture is a small, three-metre square shed hidden away in a stream-side dingle – it houses what has been a capital investment of around £20,000.

But with their own electricity bills reduced from £2,000 a year to a mere £75, plus an annual payment of £4,000 from Ofgem for producing renewable energy, as well as payment for the power exported to the National Grid, payback is expected in just two-and-a-half years.

You can read the full interesting article at Farmers Guardian by clicking here. It just goes to show that with a little imagination and advice, you can really make alternative energy investments work for you.

As Alan states in the article “There used to be three woollen mills running off water power in this valley years ago, so really we are just going back to using a resource which was already here”.