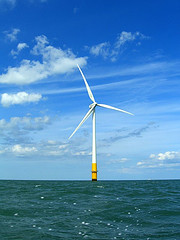 Offshore wind energy in Europe is making good progress in the first half of 2011 compared with last year reports Renewable Energy Magazine.

101 new offshore wind turbines were connected to power grids in the UK, Germany and Norway from January to June this year.

The total capacity is 348MW.

Add another 2,844 MW currently under construction and it’s not hard to see why everyone’s getting so excited.

Even the very size of installed turbines has increased – up from an average of 2.9MW in the first half of 2010 to 3.4MW in the first six months of this year.