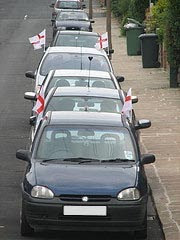 If you feel obliged to show your support for our National team and adorn your car or van with those England flags – you’d better be prepared for more trips to the petrol station.

That was the message from a ‘light-hearted’ question on BBC Radio 2 last night when a listener wrote asking the question – “Do England flags affect the fuel economy of my car?”.

That’s per flag! Most cars I’ve seen have been sporting at least 2 flags.

And it gets worse. The heavier or more loaded the vehicle is, the worse the fuel economy gets.

Now times that by all the flags you’ve seen driving around your neighbourhood and imagine that across the whole country and suddenly, the extra fuel use costs and pollution become almost Biblical in proportion.

Think I’ll stick with a sticker – inside the back window.

If anyone has more figures to add – like the total cost to motorists and/or the environment during the World Cup etc, that would be great.