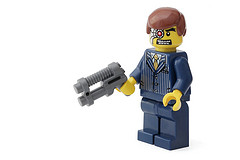 “Hasta-la-vista Baby”
The ‘Rise of the Machines’ report – you might be forgiven for thinking you’d stumbled across a remake of a Schwarzenegger blockbuster and not a report by the Energy Saving Trust, and yet, 5 years ago, that’s exactly the title they gave their report into increasing power usage in the home due to the infiltration of technology and other electrical devices.
Five years later, they’ve published their follow up report. No not Judgement Day but ‘Elephants in the Living Rooms’.
It’s a silly title with a huge message – energy consumption in homes around Britain is barely in check as the number of electrical devices requiring charging or a suitable mains plug continues to grow. Computers alone have grown from 30 to 65 million between 2000 and 2009.
We may have energy efficiency ratings for most household appliances, and these have had a very positive effect on overall energy use – the worst culprit – fridges – have dropped from being the number one power guzzler to number 3, and by 2010, are expected to be even more efficient and further down the listings.
And with some devices taking on dual roles – printers that double as scanners etc – it would seem we’re well on top of energy use.
Not so – Despite more energy efficient goods, the sheer numbers and the fact that so many are being left on standby rather than being switched off completely, means at todays rates – we could miss our 2020 CO2 emission targets.
As one blogger put it: “the number of everyday devices that seem to need a charger when we go on holiday means a whole bag dedicated to chargers”.
Of course there are positives – Laptops, which use only 15% of the energy consumed by a desktop PC, are set to treble in numbers in the next 8 years. And it’s very hard to buy a fridge with anything less than a ‘B’ energy rating (in fact 85% of fridges now sold are ‘A’ rated).
And of course, we’re starting to get the message about not leaving lights on when not in the room – 91% say they are in the habit of turning off lights when not in a room but only two thirds are doing it all the time – sometimes, a little bit more than just the thought is required.
What’s the answer? Change our beloved gadget habits? Choose manual operation instead of a remote controlled method? Or just sit in the dark with a candle? The Elephant in the Living Room points out that there is still so much we can do and whilst the electrical devices around our home might be spawning, if we’re sensible about not leaving chargers permanently plugged in or TV’s, their surround sound and numbers game consoles on standby, then we might just have a chance.
Rather than ‘No Problemo’ – If we don’t re-evaluate our energy usage habits, then it’s surely ‘Hasta-la-vista Baby’?
photo credit: pasukaru76