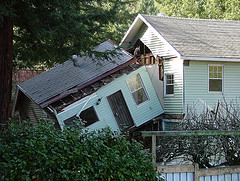 The Cooperative Insurance Company has revealed that over two fifths of homes in the UK are uninsured.
42% of those questioned didn’t have home insurance cover, saying they couldn’t afford it. 22% of people didn’t consider home insurance important whilst 18% didn’t think their possessions were worth insuring.
The startling figures are being blamed on money issues, causing UK homeowners sleepless nights, as the study found that 26% of people weren’t confident they would be bale to pay their bills every month. Two thirds of those questioned admitted they were worried about money.
However, insurance experts have warned that failing to adequately insure your property could be a false economy, as victims of property fire, flood or burglary etc will be left to pick up the full costs of building repair or contents replacement themselves. Costs that in some cases could run into several thousands.
And if you think it can’t happen to you, think again as one family found out to their cost. Upon returning from a holiday abroad, they were greeted by over £4,000 worth of damage caused by a neighbouring cat which had sneaked into their home and got shut in. Only when they went to make a claim did they find the damage wasn’t covered by the policy.

One thought on “Don’t ignore your home insurance”