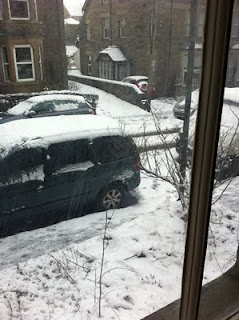 This was the scene that greeted us in Buxton, Derbyshire, when we awoke Saturday morning.

So even though we may think we’re heading out of the snowy weather towards warmer Spring, just a reminder to (if it’s safe to do so), follow your solar panel installers cleaning instructions and remove any snowfall from your solar panels.

This will ensure they operate at peak efficiency.

Of course, as the picture shows, there wasn’t a lot of daylight anyway but there was a bit.

Photovoltaic solar panels work on light, not direct sunlight, and in the icy depths of winter, any help with your energy bills has got to be a good thing. 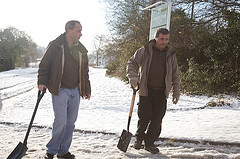 You might have missed the announcement a couple of weeks ago by the Transport Secretary that a new ‘snow code’ is to be introduced, following last winter’s snow disruption.

The code will encourage homeowners and shopkeepers alike to “take common-sense action” to clear away snowfall which last year cost the UK £1 billion in disruption, without the fear of ‘falling foul of legal action’.

Ministers say many people were put off clearing snow by the ‘worry of being sued’ if someone fell etc because they’d cleared a path or pavement.

The report also highlighted improvements that could be made in road grit logistics to help ensure there is enough supply for the worst of winters.

It also said Rail companies should make better use of contingency time-tables and de-ice more trains. Aviation bosses were also told to ensure airlines and airports had sufficient de-icer and to keep passengers better informed.

Hoorah! A victory for common-sense over crippling health & safety laws. 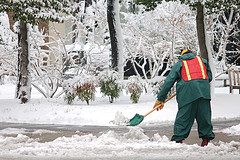 A new ‘Snow Code’ will encourage residents to take action without fear of prosecution as it was revealed that last year, many were too afraid to clear snow for fear of falling foul of health and safety laws, leaving themselves open to prosecution.
The Government has announced that homeowners and shopkeepers alike will be able to take “common-sense action” to help clear away snowfall, which last Winter, caused a £1 billion pounds-worth of disruption to the country, following the publication of a report into last Winter’s disruption.
The report also suggested greater road salt reserves be held by local councils and improvements in road salt supply logistics.
Rail and air travellers will also be cheered to learn that the report recommended Rail Companies de-ice more trains and make better use of contingency timetables, whilst air travellers will be pleased to learn that recommendations of making more de-icer available to airlines and airports alike as well as keeping passengers better informed were suggested.
One of last Winter’s biggest moans by the public involved so called boundary changes – e.g a bus station wasn’t gritted but the road was etc. The report highlights this issue and says ‘who grits what’ must be sorted out well in advance.
It concludes by advising that routes to rail and bus stations, airports and ports and access to the motorway network must be the priority to keep the country moving.