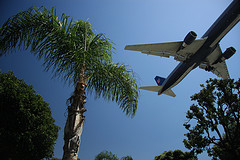 Flight Global reported how concerns by US Federal Aviation Administration led to the halting of a proposed wind turbine farm in 2010.

Aviators and aviation authorities are concerned by the ability of wind turbines to interfere with long range surveillance radar.

There’s also discussions amidst fears that solar panels could cause a glare problem for pilots.

According to Flight Global, a number of near misses have been reported that have been attributed to renewable energy sources, and the dangers don’t stop there.

Proposed wind farm sites very often have taller meteorological towers installed which can stay for up to 18 months. These slim towers which can be erected in a matter of days, without warning, pose a threat due to possibility of being poorly marked.

Aviation groups are looking to long term technology emerging which will stop the disruption to radar caused by wind turbines etc.

It’s a fascinating read and yet another side to the story of renewable energy and how best it can be deployed without impacting on the environment. Read Flight Global’s full article here.