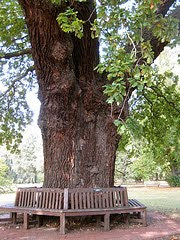 Whilst visiting my parents last Mother’s Day, down in Cambridgeshire, I asked my Dad if he thought we were in for a fine Summer (he being a wise ‘old’ sage of country wisdom).

He replied with this:

Apparently like the rhyme says, if the Oak leafs first, the it will be a generally drier Summer.

It’s as fascinating as Groundhog Day so I went in search of more.

According to the Telegraph, the Oak before Ash is becoming unreliable due to climate change.

Because warm springs advance the Oak a lot more than the Ash, the Oak is nearly always beating the Ash to leaf.

Apparently, every degree warmer gives the Oak a 4 day advantage over its Ash counterpart. Ash seems to be more responsive to the length of the day, whilst Oak the warmth of the day.

A seemingly innocent enough bit of folklore has revealed that climate change may not only be affecting the outcome of whatever leaf’d first, but also affecting the wildlife that build their lives around one tree or another. It seems the wildlife isn’t as adept at adapting so quickly to the earlier season of their favourite tree.