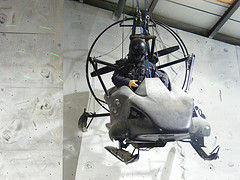 Watching the ‘Bond film – The World Is Not Enough – the other night (the principle story line being a plot to destroy oil carrying pipelines from Russia, leaving just the one new pipeline the ‘villain’ of the piece is building) it struck me that art could be imitating real life.

Not in the details, you understand, but more in the fact that the renewable industry is facing an expensive time to build new grid networks to transport the renewable power they’re generating (or planning on generating.

In particular, the massive offshore wind farms around the coast of Britain – particularly those in the North Sea, which it’s hoped will also export / import power from similar european installations, will need a massive new infrastructure to move that power around.

I believe work’s already started on such a grid, but you can be sure more work will be required, on both sides.

And the problems aren’t restricted to off-shore developments. Because many of the best sites for onshore wind farms are very remote, the costs of actually ‘plumbing’ those installations into the existing grid are substantial.

The ‘Bond film is pure fiction but in real life, the problem’s of transporting this new breed of energy are all to real.