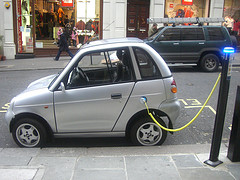 Just before Christmas, the Government announced the details of the first nine electric cars that are now eligible for a grant of up to £5000 under the subsidy scheme which started on the 1st January.

Buyers of the nine vehicles will be able to get a discount / subsidy of up to £5000.

However, as a BBC report pointed out (read it here), only 3 of the chosen cars are currently available with some not following until 2012.

At the moment, car buyers have a choice of the Mitsubishi i_MiEV, the Smart fortwo electric drive and the Peugeot iOn

Critics have claimed that the prices of the new models will make them unattractive to new car buyers – the Mitsubishi is £24,000 after the £5000 subsidy.

The Government also announced new locations getting a share of £20m to build networks of charging points in the Midlands, Greater Manchester, the east of England, Scotland and Northern Ireland.

This compliments charging stations schemes in London, Milton Keynes and the north-east of England.

Brighton recently completed its own network of charging points.

For me, whilst electric vehicles may ‘appear’ more environmentally friendly, there are three big issues that still need to be addressed:

2) The distance they can travel on a full charge and the re-charging time / availability of charging point networks.

3) The electricity we’re charging them with hasn’t been produced from renewable sources.

What’s your take? Are electric vehicles the next ‘white elephant’? Do you expect sales to be good or bad? We’d love to know – leave your comment here.